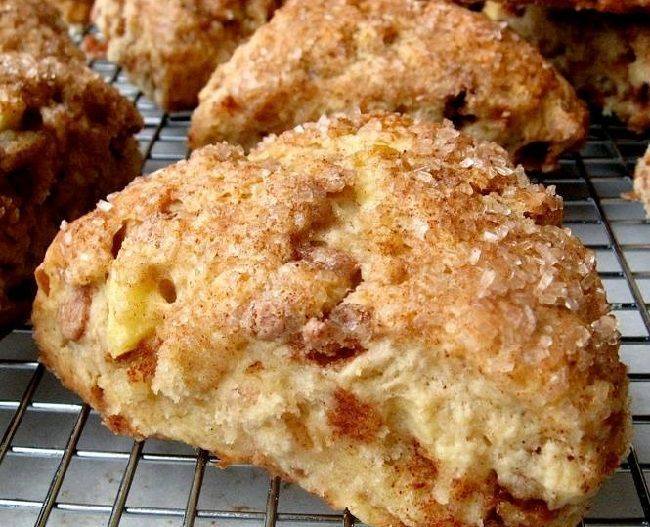 Today’s recipe of apple and cinnamon scones produces ultra-thick buttery scones with light flakey cores, an ultimate blend of texture and flavor. And you can make baked apple fritters or apple cinnamon scones with those apples. Only the sort of breakfast I love! This recipe is much like my chai pear scones. You’ll probably love these if you enjoyed them.

1. Preheat oven at about 400 degrees. Wash the apple, cut it into pieces, and cut any bit of the core off. To shred the apple using a box grater or a large-hole cheese grater.

2. Whisk the milk, apple sauce, lemon juice, sugar, and shredded apple together in a medium cup.

3. Stir the flour, salt, baking powder, cinnamon, and ginger together in a small, large pot. Attach the butter once mixed, and work it into the flour until it resembles coarse, damp sand.

4. Finally, pour the bowl that contains the apple egg mixture with the flour and butter into the large bowl. Drop to the bottom of the bowl until a dough forms and no dry flour remains.

5. In a lightly floured surface, transfer the; dough and form it into 6 to 8 inches long, 1.5-inch thick disc. If necessary, sprinkle more flour on your hands and the surface of the dough. The dough may be slightly adhesive). Cut the platter into eight wedges.

6. Line a parchment paper baking sheet and put the cut scones over it. In a preheated oven, bake the scones for 18 to 20 minutes until it turns golden brown on top. Allow it to cool completely.

7. To make the glaze, add and stir the powdered sugar, cinnamon, and water together until it forms a thick paste.

8. Drizzle the glaze over the top until the scones are completely cooled.

1. One can use milk or heavy cream instead of apple juice. Perhaps you would like to add a tablespoon of vanilla or cinnamon to the taste.

3. Look at the scones closely, because smaller scones can take a short baking time.