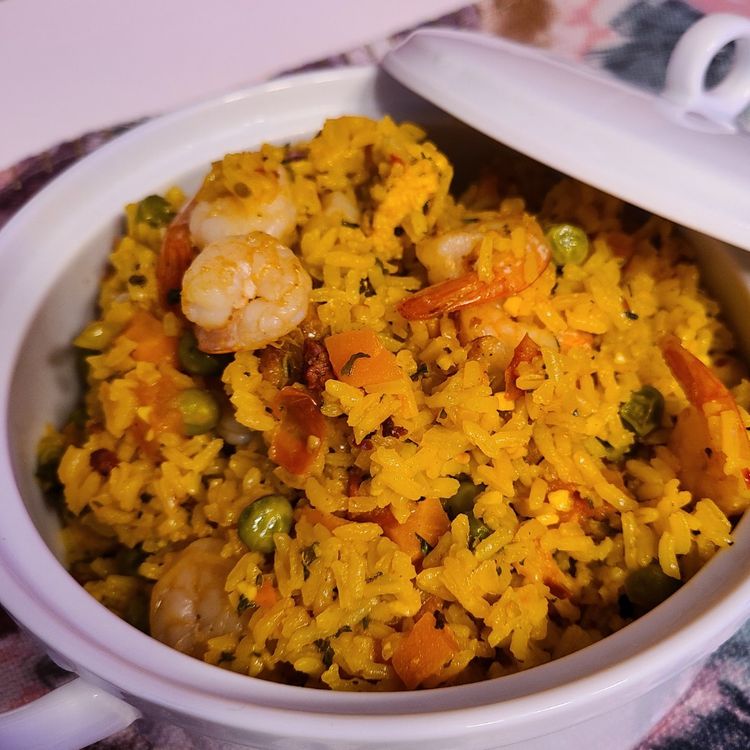 I learned to love paella when I was in college. My friend’s mom cooked me this same Chicken, Chorizo, and Shrimp Paella when I visited their town in house summer of 1999. I remembered how appetizing this paella looked, and the smell tempted me to dig straight in! From then, I started making this at home.

Step 1: Combine the olive oil, paprika, oregano, rosemary, salt, and pepper in a ziplock bag. Seal and squeeze the ingredients to make the marinade. Add the chicken to the bag, seal, and massage the chicken cubes. Place in the fridge to marinate the chicken for at least an hour.

Step 3: Slide the chorizo in a large skillet over medium heat, breaking and stirring the chorizo using a spoon. Cook for about 4 to 5 minutes until the meat has browned and cooked through. Note that if using dried chorizo, cook the sliced rounds while stirring until browned and some of the fat has rendered out. Do not drain the chorizo drippings.

Step 4: To the pan, add the rice and stir until the grains are completely coated with the chorizo grease. Add in the chicken and stir until incorporated and continue to cook for another 5 minutes.

Step 5: Spoon the sofrito into the skillet using a spatula, then stir it into the meats and rice. Now, pour in the chicken stock and wine, then stir in the artichoke hearts and peas. Bring to a boil, cover the pan with the lid, and adjust the heat to medium-low. Then, let the mixture simmer for at least 10 minutes.

Step 6: Over the rice, lay the shrimp. Cover the pan again and simmer for 10 to 15 minutes more or longer until most of the liquid has been absorbed, the rice is cooked (al dente), and the shrimp are opaque. Uncover the pan.

Step 7: Adjust the heat to high and let the bottom of the pan be caramelized. Make sure to pay close attention to the crackle of rice cooking and the smell. It should smell toasted but not burned. Then, let the Socarrat toast for approximately 2 minutes.

Step 8: Take the skillet away from the heat. Tent using a dish towel and let the paella rest for at least 10 minutes.

Step 9: Before serving, stir the paella. To release the Socarrat, scrape up the bottom and stir the toasted chips into the rice.